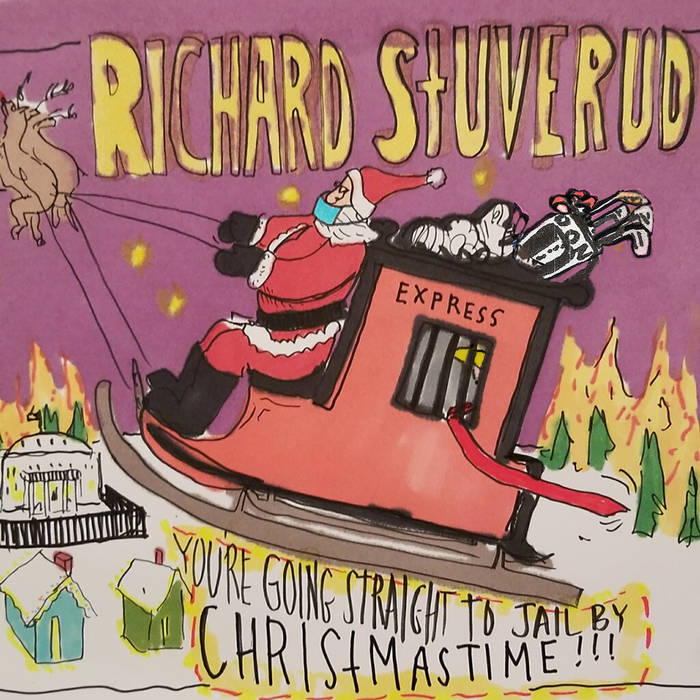 Bob Dylan once said that songs sometimes come to him, rather than setting out to write them.
By Christmas Time was that kind of song for me.
While at the home piano messing about with the chord structure, I instantly thought that a Rhodes electric piano would be perfect for the idea that was brewing. So I called Daddio at Donut Time Audio here in Oakland, remembering that he had mentioned that he recently acquired a Rhodes. He had it, so I booked time straight away!

I worked up an arrangement for the tune and ironed out most of the lyrics which were inspired by the direct result of the year of insanity known as 2020.
4 years of the cult of Trumpism, a global pandemic, civil unrest due to police violence towards black lives and the dire consequences from climate change all coming to a head.
I didn't intend to go political but I remembered hearing a friend's comments after learning about Trump testing positive for the Corona virus which was: "I hope he goes straight to hell by Christmas time!"
That statement resonated with the dark side of my sense of humor.
Could I actually have a holiday song with this as one of the lines in it? It seemed ridiculous, but then again, it is 2020. So it became the main line in the chorus during the writing process- "You're going straight to Hell by Christmas time".
Perhaps a bit of a harsh sentiment, but when a con man President endangers the lives of citizens with total incompetence, mishandling the pandemic to such epic levels of failure, that's pretty much the final straw in my book. As if his grand level of criminality, undermining Democracy with his insane Autocratic behavior wasn't already enough...now he's got blood on his hands.
And just as it seemed like our dystopian future of another possible 4 years was imminent, right action had won the day with the final word: The will of the people on the right side of history VOTING him out!

Despite the fact that we are still witnessing more and more people that seem to be enthralled with conspiracy theories over truth, a decisive win for democracy over fascism and the defeat of Trump has been glorious! (Even though he hasn't conceded as of this writing).
At this point I decided to change the chorus to "You're going straight to Jail by Christmas time".
It doesn't quite pack the punch as "hell", but "jail" works in the essence of justice.
The thought of Trump being indicted and sentenced for the fraud that he is would be like the extra marshmallows in my hot cocoa next to a warm fire for the holidays. Perhaps the greatest Christmas gift of karma ever!
The lying czar behind bars!

Let this song be the holiday song with a middle finger to 2020 Trumpism and his Republican Party of enablers!

And let's hope for a better future, moving in a better direction with the idea of peace, love and understanding prevailing for those who believe in science, facts and truth.

THE STOCKINGS HUNG WITH CARE
ABOVE ALL THE FIRES BURNING EVERYWHERE
IT'S BEEN SUCH A STRANGE YEAR
IS IT WORTH WONDERING HOW WE GOT HERE?
FOUR YEARS OF INSANITY
CAN WE REPAIR THIS AMERICAN TRAGEDY?
WE'VE HEARD SO MANY OF HIS LIES,
NOW HE HAS TO SAY GOODBYE

HE CAN GOLF AND HIDE
WE'RE GETTING OFF THIS RIDE
WE'RE GONNA MAKE IT RIGHT
BECAUSE YOU'RE THROUGH, YOU'RE ALL THROUGH

SUPER SPREADERS OF MISINFORMATION
MASK WARS, CONSPIRACY NATION
BRAINWASHED BY THIS FASCIST RACIST
AND THE FOX NEWS MEDIA STATION
WE'VE ALL HEARD TOO MANY OF HIS LIES,
THANK GOD FOR THE VERY LAST TIME!

YOU CAN RUN AND HIDE
WE'RE GETTING OFF THIS RIDE
WE'RE GONNA MAKE IT RIGHT
BECAUSE YOU'RE THROUGH, YEAH YOU'RE ALL THROUGH
AND YOUR ENABLERS TOO

Richard is a musician known for his work in the Seattle music scene as the drummer for The Fastbacks and War Babies, as well as Three Fish, Tres Mts and RNDM with Pearl Jam's Jeff Ament. Richard has been working on solo material with his debut Memories In Kodachrome released in 2020, along with various digital singles in 2021.
His follow up, Hummingbirds is set for release on March 20th, 2022 ... more

Bandcamp Daily  your guide to the world of Bandcamp

Lance Skiiiwalker joins the show to discuss his most recent releases